Harry Potter and the Chamber of Secrets

Fantastic Beasts and Where to Find Them
An Acromantula was a huge carnivorous spider capable of human speech. Thought to be wizard-bred for the purpose of guarding treasure hoards, they originated in Borneo but have colonies, including one in the Forbidden Forest.

Acromantulas had a tangle of eight black eyes, and eight legs spanning up to fifteen feet. They had a hairy body and a pair of razor-sharp poisonous pincers. They clicked their pincers when they were speaking or feeling excited and angry.[1]

An Acromantula was a carnivore who preferred A to catch large prey. They had near-human intelligence and were capable of human speech, but they never cared for wizarding laws and were untrainable and dangerous.[1] They will devour any human that goes near them.[4] It's unknown if their ability to speak was self-taught, because that was very rare.[1]

They appear to be very sociable because they lived in large colonies led by a senior Acromantula. They respected their leader and obey any demand given. For example, Rubeus Hagrid was protected by Aragog who persuaded a whole colony not to eat Hagrid even though they instinctively wanted to. Aragog's protection wasn't extended to Hagrid's friends. They usually treat sentient beings like prey.[3]

They usually live in dense jungles but a known colony lived in a forest. They cut down every tree in their large, sloping hollow and their leader lived in the center under a web.[3] An elderly Acromantula was at least an age of 50[3] and lived up to at least 54 years.[5]

Acromantuas originated in Borneo where they inhabited dense uncharted jungles.[6] They were thought to be wizard-bred for guarding a home or a treasure hoard. Long before the Ban on Experimental Breeding, the first reported sighting of an Acromantula was in 1794.[1]

In 1811, they were given a status of Beast by the Ministry of Magic because of their brutal nature.[4] Because they lived in uncharted jungles in Borneo, they were very rarely, if ever spotted by a Muggle.[6]

By June 1943, Rubeus Hagrid had adopted a young Acromantula called Aragog who eventually ended up living the Forbidden Forest for safety[3], establishing an unconfirmed colony.l In 1992 to 1993, spiders fleeing Hogwarts School when a Basilisk was unleashed headed towards the colony. Harry Potter and Ron Weasley eventually searched for their colony.[3]

Harry and Ron were spotted and picked up by Acromantulas and taken to Aragog in their hollow. He told a story supporting Hagrid's innocence in the Chamber of Secrets opening and then let the Acromantulas try and eat them and Fang but they escaped in a Ford Anglia.[3] 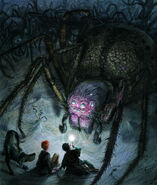