View source
You have found an article for the Deathly Hallow. You may be looking for the ordinary Invisibility cloaks.

to gain the power to hide from Death

The Cloak of Invisibility was an ancient wizarding artefact and one of the three fabled Deathly Hallows.

In Beedle the Bard's story of The Tale of the Three Brothers, Death purportedly created the Hallow for Ignotus Peverell. In legend it was thought that whoever possessed the Cloak and the other two Hallows at the same time, would have the power to defeat Death.

The Cloak was passed down through the descendants of Ignotus, including the Potter family who owned it for many generations. In late 1981, Albus Dumbledore was given the Cloak by James Potter and he kept it for safe-keeping when James was killed until he could give it to Harry Potter. Harry was given the Cloak in December 1991 and it proved useful for many events in the Second Wizarding War.

The main purpose of the Cloak was to grant the wearer complete invisibility. It was shiny[2] and long and silvery.[3] The Cloak was very powerful and was the only Invisibility Cloak that does not fade in time.[2]

It was purported to have been invented by Death so that it couldn't find the wearer.[4] A Dementor was able to see through Invisibility Cloaks[5], but it's unknown if that included a Cloak purported to stop even Death finding you.[4]

"Your father left this in my possession before he died.
It is time it was returned to you.
Use it well.

James Potter owned the Cloak but gave it to Albus Dumbledore shortly before he was killed in late 1981. Dumbledore kept it for safe-keeping until James' only child, Harry Potter began attending Hogwarts School. He then gave it to Harry with an unsigned note telling him to "use it well". Harry first used the Cloak to sneak into the Restricted Section of the Library past curfew, and it proved useful for escaping the caretaker.[2]

In spring 1992, Harry was caught using the Cloak by Professor McGonagall in the school corridors past curfew. He and Hermione had taken Norberta to get taken to Romania. However, the Cloak was eventually sent back to him and a note was put in the Cloak saying "just in case".[6]

In April 1993, he and Ron used it to sneak down to Hagrid's Hut and ask him if he was responsible for opening the Chamber of Secrets the first time. During their conversation, Cornelius Fudge, Lucius Malfoy and Professor Dumbledore showed up and Harry and Ron had to hide in the Hut under the Cloak.[3]

In February 1994, Harry used the Cloak to sneak in and around Hogsmeade. He found Ron by Honeydukes and he had to whisper to Harry. He snuck round shops and told Ron what he wanted in Zonko's and passed gold through the Cloak. They soon decided to go to the Shrieking Shack, where Draco, Crabbe and Goyle saw Ron and thought he was on his own. They began taunting and bullying Ron, so Harry began throwing dirt and they got confused and thought they were being thrown by ghosts.[7]

Unfortunately, the Cloak slipped and Draco saw Harry's head bobbing in thin air. He run away in shock and told Professor Snape, but Harry laughed and told Snape when confronted that Draco was going crazy. Harry dropped the Cloak when he was getting out of a secret passageway he used to get into Hogsmeade, and was too afraid to go back in case Snape was watching.[7]

In June, Hermione went and got the Cloak in the secret passageway, and she, Harry and Ron used it to go to Hagrid's Hut for Buckbeak's beheading.[8] They had to sneak away again in the Cloak when Cornelius Fudge was heading their way for Buckbeak. They got to a good distance away but Scabbers got frightened by Crookshanks and broke cover, causing Ron to get out of the Cloak. Harry and Hermione run on foot under the Cloak, but it was too difficult and they pulled it off.[9]

Sirius Black grabbed Ron in Animagus form to get Scabbers, and dragged him to the Whomping Willow. Harry and Hermione pursued and dropped the Cloak outside of Willow's secret passageway. It was later found by Snape, who hid under it until he got to the Shrieking Shack. He surprised everyone by taking it off and announcing he was listening when Lupin was telling a story.[10] 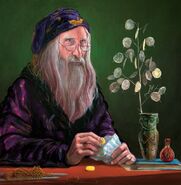