Fantastic Beasts and Where to Find Them (by J.K. Rowling)

View source
You have found an article for the charity book by J.K. Rowling. You may be looking for the book by Newton Scamander.

Fantastic Beasts and Where to Find Them

Quidditch Through the Ages

Harry Potter and the Order of the Phoenix

Fantastic Beasts and Where to Find Them is a guide book by J.K. Rowling published for charity in 2001. The book is a companion novel to the Harry Potter books, based on a fictional wizarding book of the same name penned by Newton Scamander.

The first edition was intended to be a copy of Harry Potter's schoolbook and has notes that he supposedly made. The cover story for publishing it in the Muggle world was that Scamander had edited a Muggle version of the book for charity.

The book has been published again since 2001 and has new book covers and illustrations created to acknowledge an event or project, including in acknowledgement of the Fantastic Beasts film series.

In 2017, the book was published again to include new information from Rowling about Scamander and six new magical creatures. Bloomsbury, Scholastic and Wizarding World have created their own new book covers, including digital ones, and an illustrated edition was created by Olivia Lomenech Gill.[1]

J.K. Rowling decided to pen a guide book for a charity, Comic Relief in 2001. She chose to write about creatures in the wizarding world because she thought it was a fun topic and had developed a few creatures so far in her earlier books.

The book was first published by Bloomsbury, Scholastic and Raincoast in 2001. Rowling's name was not included on the front cover of the first edition. It has helped raised over £17 million for charity by July 2009. At the time of the book's publication in 2001, Rowling had published four Harry Potter books. Many of the animals mentioned in the book would later appear in the final books, but Fantastic Beasts and Where to Find Them was their introduction to the world of Harry Potter (e.g. Bowtruckle).

In 2016, Wizarding World announced a new cover for their eBook edition. In 2017, they published their new edition, and an audiobook narrated by Eddie Redmayne. That year, a new Bloomsbury hardcover edition was published which had a cover designed by Jonny Duddle and illustrations inside by Tomislav Tomic. Scholastic's design was done by Headcase Design. Later that year, an illustrated edition was published by Bloomsbury and Scholastic featuring illustrations by Olivia Lomenech Gill.

Even though the first edition in the United States was a copy of Harry Potter's schoolbook and had notes and doodles he done inside, later editions in the US don't include any. The US editions of the book, published by Arthur A. Levine, didn't change UK spelling to an Americanised version. They have stated "… those are exactly the same – we didn’t have time or anything… Did I change the spellings? I might have… I might not have… Because, of course, the conceit is that it's a British school book anyway".[2]

In 2017, the two newer editions changed two chapters. The second chapter changes to "Foreword by the Author" instead of one by Albus Dumbledore. The third chapter was labelled "Introduction - About This Book" instead of "Introduction by Newt Scamander". The next chapters stayed the same.

New information included six new animals found in North America: the Hidebehind, Hodag, Horned Serpent, Snallygaster, Thunderbird and Wampus cat. The illustrations of every animal were updated. Newt explained that he didn't include the six North American animals in the original edition because Seraphina Picquery was worried about the Muggle attention it would bring.

Main article: Fantastic Beasts and Where to Find Them

The book is supposed to be a copy of a fictional book in the Harry Potter novels. The publication of the book in the Muggle world would technically have broken the International Statute of Secrecy, so the book describes the contents to be "fictional". In the wizarding world, the book was first published in 1927 and their 2001 edition of the book was the 52nd edition.

A few editions have a price in wizarding currency on the back cover. 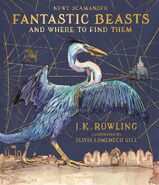 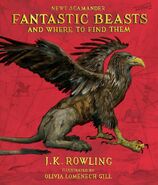