The Forbidden Forest was a dark forest found at the edge of Hogwarts School's grounds. It was ancient and dangerous and home to many creatures, including dark creatures. For that reason, it was out-of-bounds for students of the school to enter except for one Known case of detention, and during Care of Magical Creatures in which a teacher supervised.

The Forbidden Forest was huge and dense, but it had a few spacious sections too. At the very edge of the Forest near Hagrid's Hut was a narrow, earthy path that faded from view into thick, black trees. Eventually it led to a fork that took it in separate directions. It was easy to get lost in the Forest and it was best to stay on that main route.[1] It had many kinds of thick trees including beech, oak, pine, sycamore and yew.Template:Fact

It was the home of many creatures in the Forest. Friendlier creatures included a herd of centaurs who prefer to be kept out of wizard affairs.[1] Rubeus Hagrid had a Hippogriff paddock and a domesticated Thestral paddock. Hagrid was the gamekeeper of the school and he lived in the Hut on the edge of the Forest.[2] An Acromantula colony lived in the heart of the Forest in a sloping hollow. Every tree in the hollow was cut down and their leader lived in the center. A feral Ford Anglia eventually took up residence in it too.[3]

In c. 1943, an Acromantula colony was founded by Aragog.[3] It was unconfirmed in the wizarding world.[4]

In September 1989 to September 1991, Fred and George Weasley had attempted to get in the Forbidden Forest a few times and Rubeus Hagrid joked about how he spent half the time chasing them away.[2] It was known by Headteacher, Professor Dumbledore who later told them in front of the school at the Start-of-Term Feast that it was out-of-bounds to everyone.[5]

The same September, Neville Longbottom lost control of a broom in Flying and fell. The broom continued to fly and went into the Forbidden Forest.[2]

In or prior to the spring of 1992, a dying Quirinus Quirrell began going into the Forest to drink the blood of unicorns. Voldemort had possessed him and it was killing him. Hagrid found a dead unicorn and then a second went missing. He wanted to search for the unicorn because had found its blood and Professor McGonagall had Harry Potter, Hermione Granger, Neville Longbottom and Draco serve their detention helping him.[1]

Telling them to stay on the path when searching, Hagrid put them into two groups: Hagrid, Harry and Hermione were in the same party, and Draco, Neville and Fang in the other. If they found the unicorn, they had to send green sparks into the sky. Eventually, Draco and Harry joined forces instead and found the unicorn dead and it's blood being drunk. Draco run away, and a centaur saved Harry.[1]

In 1992 to 1993, spiders in Hogwarts School headed in the Forbidden Forest because a Basilisk was unleashed. In May 1993, Hagrid told Harry and Ron to follow these spiders to find out things about the Chamber of Secrets. They lived in the heart of the Forest in a hollow. Aragog told a story supporting Hagrid's innocence but wanted to let the other Acromantulas eat Harry Ron and Fang. They escaped in a Ford Anglia.[3] 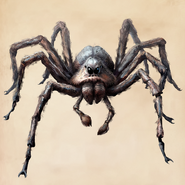 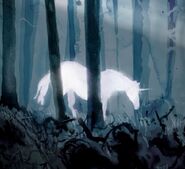