View source
watch 01:36
We're Getting Mutants in the MCU - The Loop
Do you like this video?
Play Sound

Being
The house-elf was a species in the wizarding world that was very loyal to their designated owner. They served their owner in unpaid employment and took residence in their house or establishment. They done everything they were demanded to do and because of that, many wizards treated them unkindly and took advantage.

They could be freed from their owners if they were given a piece of clothing. However, house-elves thought it was shameful to be unemployed, get paid for their work, go against their owner's demands or speak ill of them. Dobby was an exception, having served a family who abused him and got involved in illegal business, but other house-elves looked at Dobby in disdain. House-elves have their own branch of wandless magic.

House-elves were humanoid creatures that were short in height, had large heads, huge eyes and bat-like ears.[1] They do not wear proper clothing, because a piece of clothing given to them would free. They instead created clothes out of objects including tea-towels.[2] They were known to speak in third-person, e.g. rather than say "I will", Dobby would say "Dobby will".[1]

House-elves have their own branch of powerful wandless magic.[3] They could apparate in and out of places which had an Anti-Apparition spell. They don't need to use a wand, because their function was simply domestic duties. The extent of their powers were limited.[2]

They were known for being owned by powerful and rich wizarding families, and could be found in old, wizarding houses.[1] If they served a family, they were loyal to both the owner and the whole family. It's not easy to tell the difference between a male and female elf, but females tended to have higher-pitched voices.[4]

House-elves prefer a life of servitude and consider it an honour to work for their owner. They obey their owner even if they get treated unkindly or demanded to do anything that will cause them harm. They might not want to do what they were told, but they very rarely fail to do so. If they even think about going against their owner's wishes, and speak ill of their owner, they will punish themselves. However, they could search for loopholes in what their owners say. For example, Kreacher was once simply demanded to "get out": the owner meant the kitchen, but he chose to interpret it to mean that he had to "get out" of the house even though he knew that was not the intention. They do that when they feel that they were not treated kindly.

Due to their obedience, house-elves were often treated brutally for their service and specific owners thought they had little worth, no rights of their own and were viewed like they were just servants who had no personal feelings. The best way to secure a house-elf's full and complete loyalty and service was to simply treat them nicely. Kreacher searched for loopholes and complained when Harry was unkind and gave him orders. But when Hermione advised Harry to be nicer, Kreacher was far better to Harry. 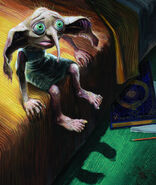