Joanne Rowling, known by her pen name J.K. Rowling (b. 31 July 1965), is an English author, screenwriter, philanthropist, and TV and film producer who wrote the Harry Potter series and it's companion novels. The series became the best-selling book series in history, selling over 400 million copies.

Rowling was the elder daughter of Peter James Rowling and Anne Rowling, born in Yates, Gloucestershire on 31 July 1965. She has younger sister, Diane Rowling, born in 1967. Her parents met when departing King's Cross for Arbroath in 1964. When Rowling was four, the family moved to Winterbourne, and then at age nine, Tutshill.

From a young age, Rowling loved writing and would invent stories with Diane. When her great-aunt gave her a copy of Jessica Mitford's autobiography, Mitford became Rowing's heroine and favourite author. Her teenage years were unhappy, when her mother was diagnosed with MS and she and her father became more and more estranged, with whom she is not on speaking terms.

Rowling was educated at St. Michael's Primary School and Wyedean School and College, where she was considered "bright" and very good at English. She took English, French and German at A-Level when she was made Head Girl, earning two A's and one B. Rowling attempted the entrance exam for Oxford University but was not accepted. She then earned her BA in Classics and French at the University of Exeter.

Rowling came up with the proper idea of Harry Potter when on a train heading towards London. She began writing immediately when she was at home. During the development of the books, she moved to Porto in Portugal to teach English where she met Jorge Arantes. They married in April 1992 and had a daughter, Jessica in 1993. Following their separation, Rowling moved to Edinburgh in Scotland to be near her sister. By then, she had wrote three chapters for the Harry Potter books.

It was now seven years since Rowling graduated from university, and she began to feel she was a failure. She was jobless with a dependent child, out of a failed marriage and she signed up for welfare benefits for help. Rowling was dealing with clinical depression and contemplated suicide. Rowling later applied for divorce from Jorge.

However, Rowling said her lack of focus on a job, gave her the liberating feeling to be able to focus more on writing, and she began writing in cafés (particularly Nicolson's Café and the Elephant House), eventually completing Harry Potter and the Philosopher's Stone. In August 1995, she began a teaching training course at Edinburgh University.

Harry Potter and the Philosopher's Stone was written on an old typewriter by the end of 1995. The Christopher Literacy Agency agreed to find a publisher for the book, which was not accepted by twelve publishers. Eventually in 1996, the daughter of the Chairman for Bloomsbury read the chapter "The Boy Who Lived"and immediately demanded the next. Bloomsbury then agreed to publish the book.

At that time, there was not a lot of money in writing children's books and Rowling was advised to find a day job. The Scottish Arts Council granted Rowling an £8,000 grant to continue writing. When the book was published in June 1997, it became very popular and won many awards, including a Nestlé Smarties Book Prize and Children's Book of the Year. In early 1998, Scholastic won a bid to publish the books in the United States for $105,000.

From the on, the Harry Potter book series became more and more popular with every new book. Rowling became the first author to the win the Nestlé Smarties Book Prize three times with the next two books, and withdrew the later books from the category in order to let other books have a chance of winning. The fourth book broke sales records in both the UK and US, selling three million copies in the US within 48 hours. The sixth book sold nine million copies within 24 hours.

In 2001, Rowling married for a second time to David Murray and they have two children, David and Mackenzie. She was pregnant with her youngest when she was writing Harry Potter and the Half-Blood Prince, and it was published when her daughter was born. Rowling dedicated the book to her, describing the book to be her "ink and paper twin".

The final book was completed at the Balmoral Hotel in Edinburgh on 11 January 2007. In July 2007, the book became quicker to sell that any other book in history. It sold 11 million copies within 24 hours in the UK and US. Rowling later said that the final chapter was one of the earliest chapters she wrote, done at the beginning of writing the series.

Harry Potter became a global brand worth US$15 billion. The books total 4,195 pages and 1,084,170 words. Rowling originally planned to write an encyclopaedia of the wizarding world, containing unpublished pieces of work and notes. She planned to give the money made to charity. Eventually, she changed the plan and created Wizarding World for future projects. The writing she has done for Wizarding World contain over 18,000 words.

Rowling later wrote three companion novels for Harry Potter, for charity, named Fantastic Beasts and Where to Find Them, The Tales of Beedle the Bard and Quidditch Through the Ages. In 2016, Rowling provided an original idea for a play, Harry Potter and the Cursed Child.

Rowling played a huge part in the making of the Harry Potter films, and had a substantial say in the script-writing and casting of characters. She eventually became a producer for the final film. Having created the production company Wizarding World, Rowling became a producer and screenwriter for the Fantastic Beasts and Where to Find Them film series. Her first script was Fantastic Beasts and Where to Find Them: The Original Screenplay in 2016.

In 2018, Rowling's second script for Fantastic Beasts: The Crimes of Grindelwald was published. 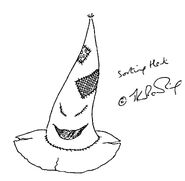 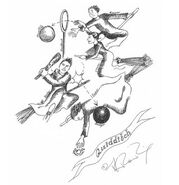