The Tales of Beedle the Bard (by J.K. Rowling)

The content of the article has been based on a person, book, company or event involved in creating and building the Harry Potter universe.

You have found an article for the book wrote by J.K. Rowling. You may be looking for the in-universe version.

The Tales of Beedle the Bard

Harry Potter and the Deathly Hallows

The Tales of Beedle the Bard is a book by J.K. Rowling, published in 2008. It's purported to have the same story of a fictional book mentioned in Harry Potter and the Deathly Hallows.

J.K. Rowling began composing the story after she completed Harry Potter and the Deathly Hallows. She stated that other books provided a source of inspiration for these tales. "The Tale of the Three Brothers" was told in its entirety in the final Harry Potter book[1] and Geoffrey Chaucer's "The Pardoner's Tale" in The Canterbury Tales.[2]

The Tales of Beedle the Bard was originally a limited edition book. J.K. Rowling handwrote and illustrated seven copies bound in leather, had hand-cased silver ornaments on their cover and five semi-precious stones for each of the five stories in it. She gave a copy to six people who had high involvement in the Harry Potter books. The seventh was auctioned to raise funds for charity.[3] It was purchased for £1.95 million by Amazon, to say thank you to Rowling.[4]

It was later stated it wouldn't be released for sale but because it caused huge disappointment to fans unable to purchase a copy of the story, it was eventually decided it would be published and it was done by Bloomsbury and Scholastic in 2008 in both standard and collector's editions.[5]

The book is purported to be the same one published in the wizarding world of children's stories. They have commentary and footnotes provided by Albus Dumbledore. There are five stories: "The Tale of the Three Brothers" was included entirely in Harry Potter and the Deathly Hallows[1], "The Wizard and the Hopping Pot", "The Fountain of Fair Fortune", and "Babbitty Rabbitty and her Cackling Stump" are mentioned but never told, and "The Warlock's Hairy Heart" was completely new.

An introduction begins by explaining how popular these fairytales are in the wizarding world, that their stories are familiar to witches and wizards in the same way Muggle stories including Cinderella and Sleeping Beauty are. However in Muggle stories, magic tends to be the source of a problem but in these stories, the heroes and heroine possess it and use it.

The Wizard and the Hopping Pot

A kind elderly man passes away who in life had created magical potions and antidotes to help people. He had a son who possessed none of these virtues so he passed on a pot that had a slipper inside it and a note that says "In the fond hope, my son, that you will never need it". The son was bitter and closed the door in the face of anyone asking for help, but then found that the pot was copying their symptoms.

The son found it very disturbing and struggled to find a peace of mind so he gave up and began helping people. Each time he healed someone, the pot was healed too and eventually it was completely healed. The slipper then fell out of the pot and when the son put it on the pot's foot, they walked off into the sunset together.

The Fountain of Fair Fortune

A fountain let one person each year bathe in it and it would answer every problem they had. Three witches headed to the fountain to have their problem answered at the same time and joined forces to solve the three challenges in their way. Asha had an incurable disease, Altheda endures poverty and powerlessness due to a robbery and Amata is distraught after being left by her beloved.

Joined by a luckless, Muggle Knight called Sir Luckless, they face their challenges: a giant worm that demands "proof of [their] pain", next was a steep slope where they have to bring the "fruit of their labours", and finally they had to pay a "treasure of [their] past". Amata passes the challenge by using magic to withdraw the memories of her ex-lover.

At the fountain, Asha collapses in exhaustion. Altheda saves her by creating an invigorating potion and realises her skills are a means to earn money, so she also no longer needs the fountain. Amata realises that giving away her regret for her cruel and false lover removed her need as well. Sir Luckless goes in the fountain of fair fortune instead, and that proposes to Amata for "her hand and her heart" which she happily gives. Everyone gets an answer to their problem, unaware that the fountain actually held no magical power.

A young and handsome warlock decides to never fall in love, so he uses Dark Arts to ensure he never does. His family hoped he would change but do nothing. However, one day, he hears two servants whispering about him not having a wife, so he decides to find a talented, rich, and beautiful witch and marry her to gain everyone's envy. He finds the girl and even though she was "fascinated and repelled", he persuades her to join him for a feast. During the feast, she tells him that she needs to know he has a heart.

The warlock shows her a beating hairy heart inside a crystal casket in a dungeon. The witch begs him to put it back in and he does, and she embraces him. But because it was disconnected from its body for so long, the heart developed savage tastes through degeneration into an animalistic state. He was driven to take by force a true human heart and tears out the witch's heart to replace his own. Finding that he cannot magic the hairy heart back out of his chest, he cuts it out with a dagger. He and the maiden both die, with him holding both hearts in his hands.

A King wanted to keep magic to himself and needed to solve two problems: he had to capture and imprison every sorcerer in the kingdom and he has to learn magic. He creates a "Brigade of Witch Hunters" and calls for an instructor in magic but could only find an unmagical cunning charlatan. The charlatan taught a few simple tricks to gain the King's confidence and begins to ask for jewellery and gold to continue teaching.

Babbitty worked for the King and laughed at him one day when he attempted to do magic using an ordinary twig instead of a wand. The King asked the charlatan join him in a public demonstration of magic and warns that he will be beheaded if anyone laughs. The charlatan later witnesses Babbitty performing magic in her house and threatens to expose her if she would not help him. She agrees to hide and help the demonstration.

During the performance, the brigade captain asks the King to bring his dead hound back to life. Because Babbitty cannot use magic to raise the dead, the crowd thinks the previous acts were tricks. The charlatan exposes Babbitty, saying blocked the spells. Babbitty flees into a forest and disappears at the base of an old tree. In desperation, the charlatan states that she has turned "into a crab apple" and gets the tree cut down.

However the stump began cackling and forces the charlatan to confess. The stump cackles again, demanding the king never hurt a wizard again, and build a statue of Babbitty on the stump to remind him of his foolishness. The king agrees and heads back to the palace. Afterwards, a "stout old rabbit" with a wand in its teeth hops out from a hole beneath the stump and leaves the kingdom.

The Tale of the Three Brothers

Three brothers travelling together reach a perilous danger and use magic to get round it and cheat their certain deaths. A personification of Death appears because he was angry at losing three new souls. He feigns being impressed and grants each brother a reward of their choice designed to trick each brother into an untimely death.

The first brother asked for an unbeatable duelling wand and was granted the Elder Wand. The second brother asked for a way to bring back the dead and was given a Resurrection Stone. The third brother asked for a way to stop Death from finding him and he was granted a Cloak of Invisibility. The elder brother won many duels but was eventually killed for the Elder Wand. The second brother found the dead wanted to stay dead and he committed suicide to join the fiancée who died before he could marry her. The younger brother lived for many years in hiding until he thought it was time let Death find him, and Death greeted him like a friend. 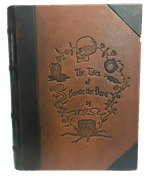